Well, as promised, I took a couple of photos of the tag album today.  Each page has a quote about scrapbooking and the book ring means I can keep adding to it. 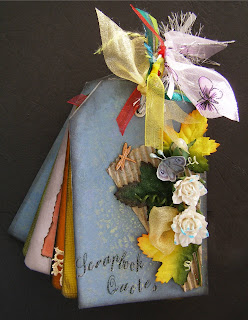 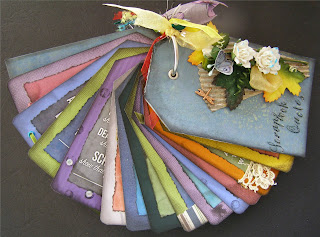 Geez, it's been a while

So where have you been ... and well you might ask.  I don't know where the last few weeks have gone.  I have been getting involved in trying different things with my scrapbooking so that accounts for some of the time.  Check this out - it started life as a can of chick peas.  The chick peas got roasted by the way ... 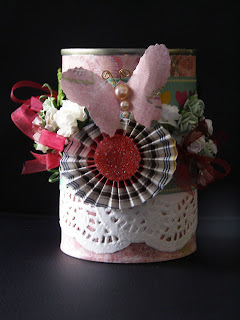 It had a tear tab top so it was really easy to keep the top edge neat and tidy and less likely to cut someone. After cleaning and drying the tin, the first thing I did was to cover the tin with a piece of paper and then add a strip of contrasting paper around the centre.

The doilies were next followed by the butterfly ribbon along the top and bottom edges of the centrepiece.

The rosette was added next.  This was made from a strip of paper that was straight-cut down one edge and torn down the other so when it was folded it gave more of an elipse than a circle.  A circle cut from cardstock and covered in glitter was added to the centre of the rosette.

The butterfly was cut from matching paper and the wings curled around a pencil to make them stand up.  A piece of wire was bent to form the antenna and fixed under the body with three different sized pearl beads stuck on to form the body itself. 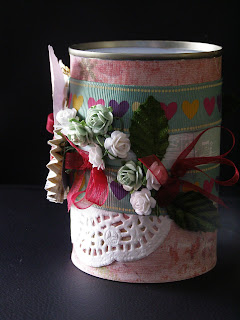 Last, but not least, small flowers and leaves were added along both sides of the rosette and ribbons inserted to add a bit more dimension.  These can all be placed to cover any little flaws in your base like covering edges and so on.


To complete the tin I placed a small round of plastic foam in the base so that when pens or pencils are dropped into it there isn't a loud clatter.

This is the first time I have tried anything like this before and I wondered whether it was even going to be worth keeping as I was making it but now that it is complete it looks quite pretty.

I've made a couple of tag albums as well.  One is for my Mum for Christmas (no telling) so no pictures of that until after Christmas.  The other is a collection of sayings around scrapbooking that I found on the scrapbook.com website.  Photos of that once I have completed it - it's nearly there.


Jan & I have also been asked to join an ATC swap.  We didn't even know what one was until then but have decided to give it a go.  ATC stands for Artist Trading Cards.  They are small cards lovingly crafted and traded with other artists. Our first swap has a Christmas theme and there are twelve participants so we have been busy making twelve identical cards each.  They went in the post today and now we wait.  The swap closes on December 1st and then we will get a parcel back with one of our cards plus one each from the other eleven members of the group.  If it as exciting as the Scrapfest Tag Swap we did recently then it is going to be lots of fun.  We are already hooked and have been out and bought albums to store the cards in.  Photos of the cards later too.

Lots of other stuff going on in our lives at the moment but more about that in a later post.  Night everyone, stay safe and well.  See ya!