As you will have seen from my previous post we are now living in Blenheim. How did this happen?

Very good question!!!  Two days before Jan and I left to go to Scrapfest last year I was given notice from my job at Paperzone in Hamilton.  I was not surprised when it came as I had a feeling that 2013 was going to be a year of changes but I certainly did not expect what was coming next.  Anyway, I am racing ahead a little.

The following day I was vacuuming the floor at the shop, as I often did, when I found a white feather near the front door.  Nothing unusual in that you might say, but it was the first time I had ever seen one there and white feathers have some significance for Jan and I.  I went home and told her I thought it was a sign and that all would be okay.

We were determined not to let the news spoil our trip to Scrapfest as we had been looking forward to it for so long.  We had an interesting road trip south to Nelson, plenty of time to talk about what our options were, mull over some ideas, but generally just enjoy the scenery.

We were about two and a half hours into our trip when all of a sudden the car radio came on - by itself.  Jan was driving and I was just gazing out the window at the scenery - I thought her mobile phone was ringing only it wasn't, and the radio had been switched off before we left Hamilton, so it was definitely a little spooky.  We both looked at each other and said "Ann".  Ann was Jan's close friend who had just passed away and we were imagining her playing little tricks on us as we traveled.  The words of the song that was playing were along the lines of "this is not where you are meant to be" - it is a song I had never heard before nor since - another sign perhaps.

That was not the end of the 'spooky' events however as when we entered the Marlborough Sounds a man tapped me on the shoulder and pointed out the most beautiful rainbow - both ends were in the sea.  When I turned to talk to the man he had disappeared - it was a big deck and I had not turned away from him for very long so I am left wondering if he was ever there.  For me, rainbows are definitely a sign - usually of something good - maybe this was where we were meant to be.


Anyway, Scrapfest was fantastic - superbly organised, fabulous venue at Monaco Resort, and we are still buzzing almost six months later.   We learnt a lot, met some fabulous people and I remember having a conversation with one of the organisers and telling her that I had been feeling that Scrapfest was going to be a turning point for Jan and I and that was why it was so important that we be there.  Boy, I was not wrong.

We had been hassled by one of the attendees, Beth (nicely of course), about coming from the North Island and she told us that we needed to have a passport to go to the South Island so we had made up pretend passports ready to be stamped.  Unfortunately Beth forgot to bring her stamp so she suggested she take our passports, stamp them and post them to us.  We agreed but later got a text from her inviting us to stop off in Blenheim for coffee, which we did - at the lovely Raupo Cafe.  We had a really enjoyable time and thought Blenheim was a lovely place.


Our road trip home was uneventful and the following day I took Jan to Auckland so she could fly down and spend time with Michael, Anna and Ellie.  I spent the time at home catching up with a few jobs and then it was time to go and pick Jan up from Auckland.  When she went back to work there was a letter on her desk advising her that the company was going to restructure and seven people were going to lose their jobs.  Funnily enough this didn't faze either of us.  We just knew she was going to be one of them and we set about thinking what our next move was.  The process for choosing who would stay and who would go was put in place and, after what seemed an eternity, she received notice that she too was being made redundant.  A quick trip to the bank and the decision was made to put the house on the market and move to Blenheim.  The house sold with three weeks and then we had to quickly find somewhere to live.  If ever there was a sign that something was meant to be - this was it.


Another road trip and we had secured a new home and then back to Hamilton to pack up all our worldly goods.


Oh my, it all happened so fast.  A month later and the entire contents of our house had been packed into a truck, the two cats and ourselves were packed into the car, and we were all on our way to a new life, in a new town, in a new island, doing goodness knows what.  But watch this space ...
Posted by Unknown at 14:14 No comments:

Well, here we are, it's a new year and so much has happened in the last couple of months.  More about that in the next post - suffice to say that we now live in Blenheim.  Since moving here we have joined NZ Papercrafters and Marlborough Papercrafters, both Facebook groups which we are excited to be a part of.

NZ Papercrafters set a challenge to use a layout from http://blog.scrapfriends.com.au/ as the basis for creating one of our own.  Here is my take on the challenge. 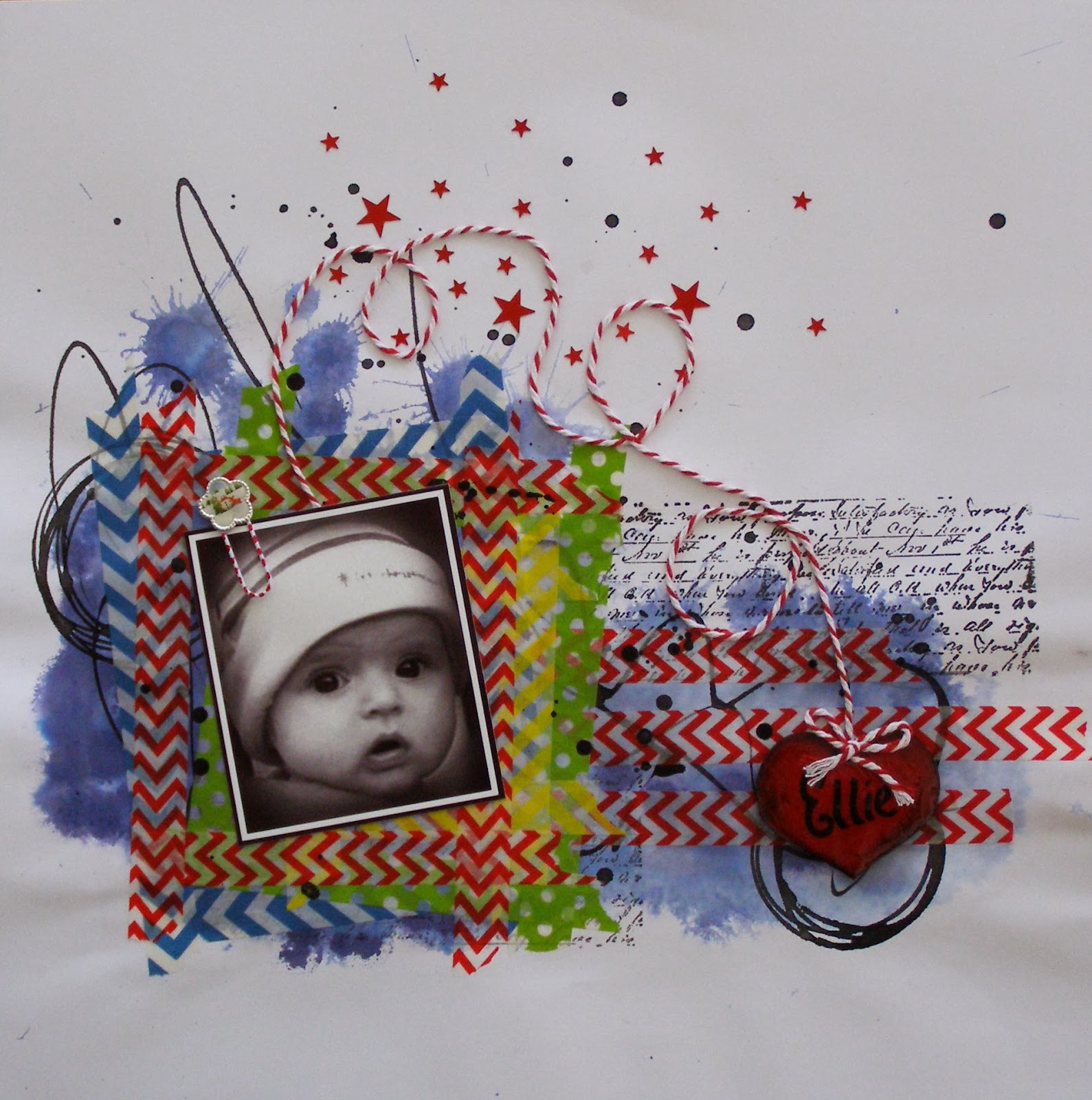 With plain white card as the base (actually the insert from a photo album) I used Tim Holtz Distress Inks and Stains in "Chipped Sapphire" and "Faded Jeans" to create the watery background.  This was left to dry and then India Ink was trailed randomly around the page from an eye dropper with a few drops splattered across the page to finish.  Again, that was left to dry before stamping the Kaisercraft "Script" stamp onto the background in a couple of places.  The strips of red chevron washi tape were added followed by the 4 frames using yellow, red & blue chevron and lime green polka dot washi tapes.  As washi has a tendency to lift, I put a thin coat of Mod Podge over the taped areas.  I found some red and white bakers twine in my stash and attached that using a trail of liquid adhesive.  I found a small wooden heart which I painted and added my title, inked the edges and sealed with Glossy Accents before adding a tiny bow made from the remnant of the bakers twine.  I found a plain white paper clip and added little spots of red paint to give the illusion of stripes and topped it with a flower charm to complete.  This was clipped over the photo and attached with a pop dot to add extra dimension.

The photo was taken on Boxing Day (2013).  Ellie was being held by her dad but I just loved her expression so decided to zoom in and focus on her face.  Removing the colour from the photo was easy and really emphasized her beautiful eyes and cute little mouth.  She was dressed in red and white and this has been reflected in the use of red and white as the dominant colour for the embellishments.  I love this little pic of her and even have it on my phone.
Posted by Unknown at 11:52 No comments: